Paxton’s paintings are characterized by their softness and luminosity and attest to his particular interest in the art of Johannes Vermeer. The Other Door presents a more simplified composition than is commonly seen in Paxton’s work. A single woman, wearing a flowing pink and gold dress, grasps the knob of a door, which is just slightly ajar, revealing a tantalizing view into another light-filled room.  She pushes back her long blond hair, and her eyes stare off in the distance, as she listens to something on the other side of the door.  Paxton has paid great attention to the drapery of her dress and the ornate pattern on the chair in the foreground.  The interior is otherwise simple, with cream colored walls and doors.  Typical of Paxton’s work is the soft focus of the piece, which is balanced by his attention to detail. 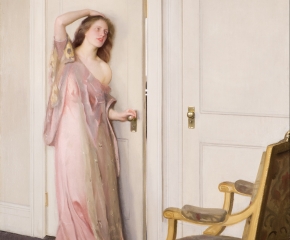 William Paxton
Back To Top