Grand Manan Island, Mount Desert Island, and the lush coastline of Maine were popular destinations for nineteenth-century Hudson River school painters, as these locations provided vistas in a “pure, natural state, dramatic cliffs and coves, and…isolation from industrial cities,” which made them perfect settings for artists like Hart to seek inspiration. [1]

Sunset on Grand Manan Island, New Brunswick offers a dramatic view of the coves, cliffs and rolling waves that are so characteristic of the locale.  Though the vista is pictorially faithful to its dramatic natural subject, Hart romanticizes it with vast spaces of sea, sky, and rocks. 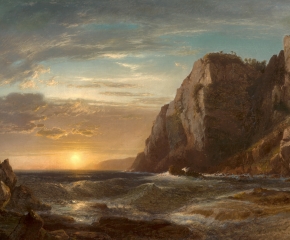 William Hart
Back To Top