During the 1910s, the area around Cornish, New Hampshire, became Willard Metcalf’s favorite place to paint. Cornish had flourished as an artists’ colony beginning in the 1880s and 1890s, when sophisticated men like Thomas Wilmer Dewing and Augustus Saint-Gaudens settled there. As these figures moved on or passed away, they were replaced after 1900 by a group of writers, and President Woodrow Wilson had a “summer White House” there from 1913 to 1915 as well. Although one would expect Metcalf to have visited Cornish earlier, when many of his colleagues were active there, it was through the second generation of literary colonists that Metcalf came to know the place.

Brought to Cornish by the dramatist Louis Shipman and his wife Ellen for the winter of 1909, Metcalf painted the first of a series of highly accomplished and well-received snowy landscapes. Metcalf returned to Cornish in the winter of 1911 with his new bride, Henrietta, working productively and with success, and returned for the summer, staying at the Davidge mill in nearby Plainfield. During this very happy time of his life, Metcalf socialized with Homer Saint-Gaudens, the son of the sculptor, and Maxfield Parrish, and painted his only summer views of the Cornish area.

Metcalf often used a stream in the foreground to lead the viewer’s eye into his compositions; in Green Idleness, that stream is Blow-Me-Down Brook, which lies to the east of Plainfield. He had discovered the brook in 1909—it appears in two of his well-known canvases from that year, Icebound (Art Institute of Chicago) and The Frozen Pool, March (private West Coast collection)—and he continued to depict it throughout his time in Cornish. As an Impressionist committed to the methods of Monet, Metcalf would have painted Green Idleness largely on the spot, especially since the brook was a short walk from the Davidge mill. 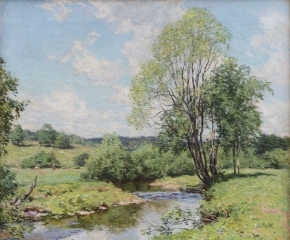 Willard Leroy Metcalf
Back To Top