Provenance: private collection, Upper Montclair, New Jersey, from before 1960 to 2001; by descent in the family until 2007

In Sheppard’s Schooner off Ten Pound Island a tall schooner is anchored in the smooth, open ocean. The detailed and accurate depiction of the vessel’s rigging and body lend to the realism of the work.  The small boat that runs alongside the schooner interrupts the reflection that the schooner’s large sails cast upon the glassy water. The horizon line that separates the calm ocean and the cloudless sky is only distinguishable because of Sheppard’s subtle tonal shift in blues and greens and the hazy silhouette of Ten Pound Island in Gloucester Harbor. 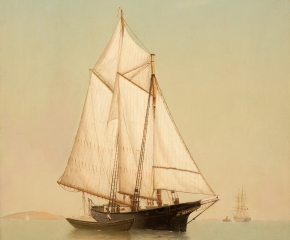 Warren Sheppard
Back To Top