Palmer’s mastery in depicting brilliant contrasts, yet subtle coloration of the most stark and barren seasons won him critical acclaim.  Winter Sunrise is not only a beautiful composition; it is a superb example of Palmer’s ability to render a snow-filled landscape with soft, reflective light to create a serene mood. The greens of the trees in the background break up the white, blue tinged of snow, and the colors reflected in the stream also provide contrast. The bravura brushstrokes and overall color palette are typical of Palmer’s work at this time. Palmer thought highly enough of Winter Sunrise to enter it in an exhibition at the prestigious Century Association in 1913. 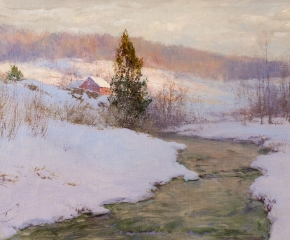 Walter Launt Palmer
Back To Top