Off the Maine Coast

Birch’s works of the 1820s and subsequent decades show the influence of the 18th century French painter Claude Joseph Vernet, whose romantic views of ships in distress off craggy shores were shown at the Pennsylvania Academy and were familiar to Birch through engravings. In Off the Maine Coast, Birch followed Vernet’s marine vocabulary fairly closely, with large rocks to one side of the composition, rounded breaking waves in the foreground, and a stormy sky. However, as John Wilmerding has observed of such works, Birch simplified Vernet’s style and gave his scenes “the feeling of actually observed places. Birch focuses attention on fewer details and without Vernet’s theatrics” such as tall cliffs, gesticulating figures, and striking contrasts between spotlighted areas and deep shadows.[1]

Instead of Vernet’s cluttered, dramatic compositions, in Off the Maine Coast Birch fashioned an image that is carefully balanced in every respect. He pared down Vernet’s cliffs to a few large boulders and eliminated his eye-catching figures. Strong contrasts are restricted to the lower half of the image, where white foam stands out against the dark green water, while a wider range of tones appears in the sky above, where dark storm clouds and distant rain give way to blue sky and sunlit clouds. Birch also balanced the mass of the foreground rocks on the left with the more distant, buoyant ship on the right. He did not neglect the center of the image either: beyond a foreground rock, two smaller vessels pitch in the turbulent waters in the middle ground; a distant sail hugs the far coast beneath a lighthouse sited on a bluff; and seagulls soar overhead. In his handling of paint, too, Birch found a balance between careful description of the ships and boulders, the broad treatment of the sky, and gestural freedom and impasto in the crests, foam, and spray of the crashing foreground waves.

Off the Maine Coast is related to a larger work of the same title and date in collection of the Fruitlands Museum in Harvard, Massachusetts. While their compositions differ, both paintings include crashing waves, large rocks in the left and center foreground, a large ship on the right, and a lighthouse on a distant bluff. Although the exact location of the scenes is not known, their topography corresponds to the Maine coast, and they have been traditionally identified as Maine, where Birch is known to have painted. 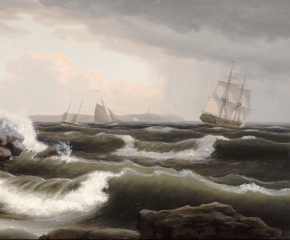 Thomas Birch
Back To Top