Provenance: the estate of Ketil Carlsen, the artist’s nephew; John Carlsen, a grand-nephew of the artist, 1945; by descent in the family until 2011

The verso inscription on Chrysanthemums attests to Carlsen’s presence in London in 1898, a fact not previously recorded by art historians. In 1899 a period source placed him there, “painting a picture for the Paris Exposition,” the huge world’s fair of 1900. He had returned to New York by September 1900.[1] During this English sojourn, Carlsen appears to have continued his experimentation with aspects of the Impressionist style, which was gaining acceptance in the United States during the 1890s.

With its strong color and active brushwork, Chrysanthemums is one of Carlsen’s boldest forays into Impressionism. The chrysanthemum was the ideal subject for such an endeavor: Carlsen articulated the narrow petals of the big, fluffy blooms with long, flickering brushstrokes, and he treated the vase and background in broad patches of color. He evoked the original Greek meaning of the flower’s name, “golden flower,” with glowing yellow, orange, and creamy white blooms bathed in a yellow-green haze. Moving away from the complex spatial arrangements of his earlier still lifes, in works like Chrysanthemums of the mid-to-late 1890s Carlsen presented objects in shallow depth with a new structural clarity that presaged the subdued formal sophistication of his work after 1900. 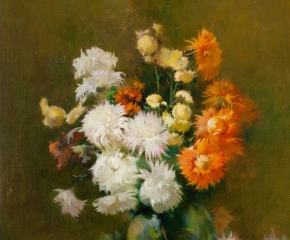 Søren Emil Carlsen
Back To Top