Close Your Eyes treats Guy’s favorite subject: children. In the painting, a girl has told a boy to close his eyes and open his mouth. Expecting that he will be fed a cherry, the boy complies, but we see the mischievous girl putting a twig into the boy’s mouth instead. The figures are beautifully modeled, with rosy flesh and subtle hints of color in their clothes, while the landscape behind them is rendered with careful attention to light and texture. Guy relished detail, and he paid keen attention to even the smallest detail throughout Close Your Eyes, such as the chipped edge and cracked boards of the stairs in the right foreground.

Guy scholar Bruce Weber writes that Close Your Eyes is one of several paintings by Guy that “center on the interaction of a brother and sister, in which the sister is portrayed in the act of garnering her brother’s attention. As is typical of his genre paintings, the surface of the picture is marked by a smooth, glossy, enamel-like surface. Colors are carefully blended and fused, and brushstrokes are invisible. Guy’s early genre scenes typically include a picket fence, which spans the width of the background and creates a physical enclosure, which helps to convey a sense of intimacy, safety, and distance from the regular cares of the world. Also, small objects or pieces of furniture frequently appear in the right foreground of his scenes, such as the steps seen in [Close Your Eyes], which help to lead the viewer into the composition.” (Weber, “Seymour Joseph Guy,” 144.) 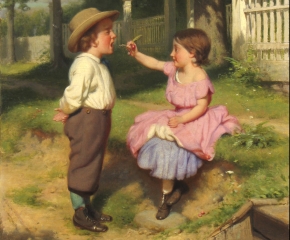 Seymour Joseph Guy
Back To Top