Thomas Fuller was a physician in Cooperstown, New York, from 1791 until his death in 1837. He had a family connection to James Fenimore Cooper, who was a close acquaintance of Morse’s. Morse spent the summers of 1827 and 1828 in upstate New York, visiting friends and taking on portrait commissions. A larger pair of Fuller portraits, now in the Museum of Fine Arts, Boston, was completed in June 1829, and our cabinet portraits were done three months later, in September. It is possible they were painted for the Fullers’ children, who may have wanted a likeness of their parents, but who could not afford or accommodate larger versions. 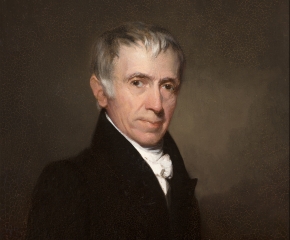 Samuel F. B. Morse
Back To Top