In the early nineteenth century, travel by sea was more than a method for the exchange of goods or a pleasant pastime: it was man’s primary means of encountering the outside world, and the first step toward what we today call globalization. As a resident of Liverpool, Robert Salmon witnessed the constant traffic of British and international vessels that called at the busy port, and he knew the place he could spot them first as they came in from the Irish Sea: Holyhead, on the island of Anglesey in northwestern Wales.

Shortly before Salmon left for the United States in 1828, a series of signal stations was established between Liverpool and Holyhead, to bring news of arriving ships and to send messages. Each station would signal information by semaphore, using flags or angled beams, and relay it to the next station, in a process known as an optical telegraph. With this system in place, the city could receive word hours before a ship would arrive at the docks.

In this painting, a man in the left foreground gestures toward the Holyhead signal station perched atop a bluff on the right. The cliffs of Anglesey spread out to the south, and on a small island just off the coast in the middle distance, South Stack Lighthouse can be seen. The sails extending back to the horizon indicate the site’s advantageous visibility, and the creamy sky, which fills fully half of the composition, suggests the vastness of the possibilities beyond. 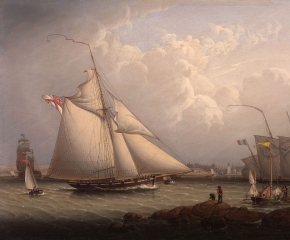 Robert Salmon
Back To Top