Gwathmey usually treated a single figure or a small group of figures engaged in everyday life, but he occasionally painted more ambitious, large-scale works depicting an entire community. One such work, The Gathering, depicts an African-American community composed of humble shacks, a church, and a few stores, partially silhouetted against the pale orange of a sunset sky. Gwathmey indicated the buildings’ functions using the store signs he remembered from his childhood in Virginia: an open scissor indicates the barbershop, a large shoe the cobbler, and stained glass the church. Gwathmey also included the gaudy advertisements that embellished poor Southern towns at that time, such as the bottle and pack of cigarettes by the general store in the foreground. The “666” also advertised on the store’s wall was a popular cure-all sold throughout the South, and Gwathmey may have used it as a symbol for Southern self-deception, or more literally, as a grim reference to the Apocalypse. Men and women in working clothes congregate in front of a restaurant serving “Fish Fresh,” others peer toward them from neighboring porches, and still others emerge from the background and appear to approach the central gathering. Some carry the implements or fruits of their labor, while a young boy dances as he strums a guitar and a man rolls a spare tire.

Gwathmey painted such village scenes beginning in the 1940s, often reusing symbols such as “666,” which appears in From Out of the South, c. 1941 (Smart Museum of Art, University of Chicago). The same church is depicted in Hoeing, 1943 (Carnegie Museum of Art), and a number of elements, including the bottle, cigarettes, scissors, fish, and the cobbler’s shoe can be found in Saturday Afternoon, 1949 (collection of Mr. and Mrs. Sherle Wagner). Following The Gathering and the successful Civil Rights movement, Gwathmey painted another village scene, United, 1969 (private collection), featuring an integrated gathering of residents arm in arm. 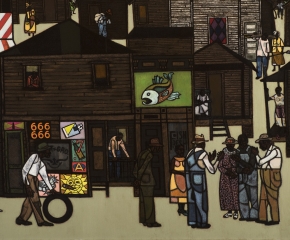 Robert Gwathmey
Back To Top