Scene in a Bar-Room

Scene in a Bar-Room is Woodville’s first painting of note. In his detailed study of Woodville, Justin Wolff wrote that Scene in a Bar-Room is loosely inspired by William Sidney Mount’s The Tough Story, 1837 (National Gallery of Art, Corcoran Collection), which Woodville likely saw firsthand in the collection of the Baltimore aesthete Robert Gilmor, Jr.[1] Woodville and other aspiring artists were permitted access to Gilmor’s collection, which included American paintings by the likes of Mount and Thomas Cole, as well as works by Dutch, Flemish, and English genre artists such as Jan Brueghel, David Teniers the Younger, and Sir David Wilkie. These masterpieces undoubtedly influenced Woodville’s choice of subject and style.

Painted in the spirit of Teniers, Scene in a Bar-Room is a small, unassuming composition that shows two ruddy-nosed men seated in a bar as they warm themselves by a stove. The men seem to be regulars at the bar; they both appear weary, despondent, and isolated from each other and their dingy surroundings, which include a chair with a broken back and a scattering of earthenware jugs. The man on the right gazes out at the viewer as he takes a drag on his pipe and wisps of smoke emerge from his mouth. His companion, who dons a poorly patched overcoat, stretches his hands out over the heated stovetop.

Although Scene in a Bar-Room is of humble size and subject, the painting is nonetheless one of particular importance in Woodville’s brief career. It was the first painting he exhibited at the National Academy of Design in New York in 1845, and was purchased by Abraham M. Cozzens, a prominent collector and member of the executive committee of the American Art-Union. More than twenty years after it was painted, Henry Tuckerman mentioned the painting’s significance in his Book of the Artists:

[Woodville] was first known to the American public as a painter, by a little picture of very humble pretensions as regards subject, but bearing indications of decided executive ability. It was the interior of a bar-room with two vulgar habitués seated therein…The immediate sale, however, of his first attempt seemed to justify the vocation…Woodville soon went to Germany, and studied at Düsseldorf…[2] 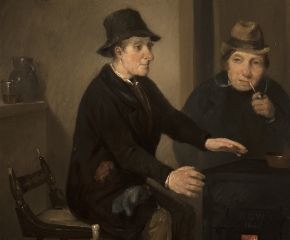 Richard Caton Woodville
Back To Top