Niagara Falls from the Canadian Side, Table Rock

As Niagara Falls became a requisite subject for print series devoted to the American landscape, the number of visitors to the Falls increased rapidly. Improved transportation, especially with the opening of the Erie Canal in 1825, was another factor. The joint rise of tourism and printmaking, in turn, affected the production of views, since more experienced, sophisticated viewers required novelty and variety. Rembrandt Peale’s response was to create at least five different views to suit a range of tastes and moods.

While awe at the sublime grandeur of the Falls was a common initial reaction for artists and visitors alike, a more placid mood developed toward the mid-nineteenth century, as the Falls became a common destination and acquired the atmosphere of a resort. Pictorially, this translated into quiet, picturesque compositions like Niagara Falls from the Canadian Side, Table Rock, which presents the wide expanse of water at the base of the Horseshoe Falls’ wide arc. Table Rock appears at the end of the Falls on the right, and the American side can be glimpsed at the left. A single figure lounges peacefully on a flat rock at the edge of the water, gazing out at the warm light that suffuses the cloud of mist at the base of the Falls and the hazy sky above. The great cataract seems to fall silent as the viewer focuses on the fine atmosphere. 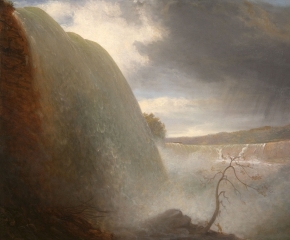 Rembrandt Peale
Back To Top