In Hollyhocks, a relatively rare still life by Weyl, the artist presented five stems of maroon and lavender specimens against a creamy off-white background. The closely cropped composition monumentalizes the flowers, the contrast between the light background and the darker stems animates them, by focuses the viewer’s attention on their gently bending linear movement, and the partially backlit effect emphasizes the volume of the blooms and buds. Together with Weyl’s broad brushwork, these effects create an admirably bold, dynamic image from the simplest of elements.

Hollyhocks closely relates to another painting of the same name and format from 1881 (Smithsonian American Art Museum, Washington, D. C.), which provides a secure reference for dating our painting, when considered with the handful of other known still lifes by Weyl. The comparison between the blond tonality of our painting and the dark green tonality of the Smithsonian painting also indicates that Weyl was approaching still life as a vehicle for beautiful formal and tonal relationships, in accordance with the Aesthetic Movement and James McNeill Whistler’s art-for-art’s-sake credo.

The principal influence on Hollyhocks was certainly George Cochran Lambdin, whose vertical, flat floral still lifes combined a modern, flat composition, derived from Japanese prints, with plenty of naturalistic detail. While preserving both of these characteristics to some degree, Weyl treated his subject less literally and more evocatively than Lambdin, and imbued his painting with a formal boldness foreign to Lambdin’s more delicate images. A connection between Hollyhocks and John La Farge’s vertical paintings of hollyhocks from the 1860s is also possible. 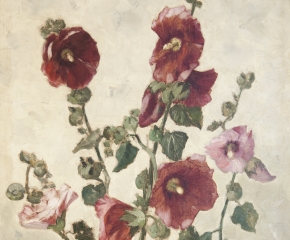 Max Weyl
Back To Top