In A Discussion, three elderly men conduct business in a study strewn with old books and papers. As in the psychologically complex Dutch group portraits of the seventeenth century, the men have specific expressions that convincingly characterize them and suggest their relationship with one another. Another Dutch influence is Vermeer’s convention of lighting an interior from a window on one side of the composition, enabled Moeller demonstrated his mastery of tonal values in rendering the play of light and dark. The raking light brings out the contrast in the tattered, crumpled papers and books as well the wrinkled skin of the men. Moeller likely saw the former as a symbol for the latter; like the books and papers that surround them, the elderly men may be old-fashioned and in poor physical condition, but they contain the history and wisdom of their times and remain vital participants in the present. 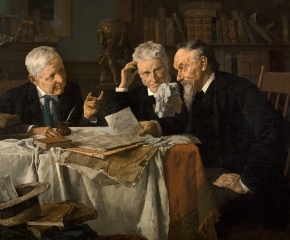 Louis Charles Moeller
Back To Top