Levi Wells Prentice spent his childhood in upstate New York, surrounded by the beauty of the mountainous region. Around 1870, he began his career painting the picturesque mountains, lakes, and woodlands of the Adirondacks, which were then populated with a growing number of tourists and outdoor sport enthusiasts.

A self-taught artist who never traveled abroad, Prentice was removed from mainstream artistic developments. Consequently, his painting style is quite distinct and unique in late-nineteenth-century American art.  He emulated the earlier Hudson River School painters in subject and composition, yet his clearly defined, bold forms often resemble folk art styles. While living and working in Syracuse, Prentice made four excursions into the Adirondack Mountains. During his travels he made oil studies in sketchbooks and on single pieces of paper, which he used as templates for the canvas paintings later he executed in his studio. Prentice used these sketches throughout his career, and painted over seventy landscapes between 1871 and 1890.

Autumn Reflections is a fine example of the crisp, fresh quality that Prentice could achieve in landscape painting.  He painstakingly depicted the reflections of the landscape and rowboat on the lake.  His signature stylized trees dot the hillside, and the two small houses in the middle ground lend a certain domesticity to the scene. 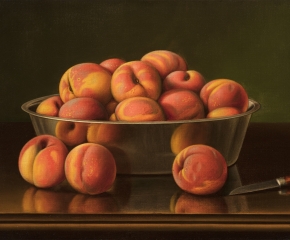 Levi Wells Prentice
Back To Top