Illustrated: This work appears in five photographs of the interior of the Edward and Dorothy Norman House, 124 East 70th Street, New York City, taken by the firm Gottscho-Schleisner in 1944. Library of Congress, Prints & Photographs Division, Gottscho-Schneider Collection (LC-G612-T01-44878, -44879, -44883, -44945, -44946); the work also appears in a photograph of the interior of Dorothy Norman’s house in East Hampton, New York, taken by Eric Kroll in 1960 and reproduced in Dorothy Norman, Encounters: A Memoir (New York: Harcourt Brace Jovanovich, 1987), pl. 25.

White Mountain Country, Summer No. 29, Dixville Notch, No. 1, 1927, was painted on one of Marin’s several automobile trips through New England on the way to and from Maine. Returning from Deer Isle, Maine, in 1927, he stopped at Dixville Notch, New Hampshire, a pass in the White Mountains about 20 miles from the Canadian border. The present work depicts two of the distinctive rock outcroppings that jut up from the steep slope of the notch, which here is covered in green foliage. Marin described these jagged forms with crisp strokes of his brush, including a few hints of orange to catch the eye, and then applied light gray washes in the sky that follow the contours of the ridge, emphasizing its zigzag pattern. On the surrounding mountainside, descending strokes of dark green bleed into broad, light green washes, creating softer areas around the sharp rocks. By hatching, cross-hatching, and scribbling with his pencil under and over these forms, Marin solidified and ornamented them, while also indicating their flatness and adhesion to the picture plane.

Marin used several other modernist techniques to counteract illusionism and to call attention to the work as an art object. He left the edges of the image indistinct, so that the viewer sees the image as a fragment removed from nature, rather than a view glimpsed through the window of the frame. By mounting the watercolor on a mat with a black wash behind it, which serves as a striking border, he also presented the full sheet of paper, complete with pinholes at the corners, as a physical artifact of his artistic process. In addition, the transparent medium of watercolor and pencil allows the artist’s working methods to be fully legible.

Our watercolor was owned for many years by Dorothy Norman, a central member of the Stieglitz circle in its later years. After visiting the Intimate Gallery in 1926, the young art lover became fascinated by Stieglitz and his brand of modern art. By 1928 she was involved in running the Intimate Gallery, and she was a major force in the founding and operation of its successor, An American Place. During the late 1920s and early 1930s, she and Stieglitz had an open love affair, and they remained close until his death in 1946. Norman was the chief steward of his legacy: she organized his papers, published a book of his photographs in 1960, founded the Alfred Stieglitz Center at the Philadelphia Museum of Art in 1968, and wrote his first full-length biography, Alfred Stieglitz: An American Seer, in 1973. 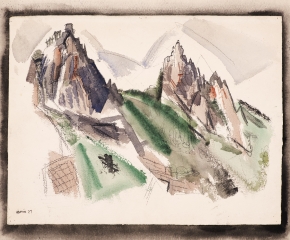 John Marin
Back To Top