Exhibited: The Metropolitan Museum of Art and Baltimore Museum of Art, 1967, American Paintings and Historical Prints from the Middendorf Collection, 1967, no. 20; Hirschl & Adler Galleries, New York, American Still Lifes of the Nineteenth Century, 1971, no. 14. illus.; Westmoreland Museum of Art, Greensburg, Pennsylvania, Food in the Kitchen, 1975, no. A92; Hirschl & Adler Galleries, The American Experience, 1979, no. 41; illus.; Joslyn Art Museum, Omaha, Nebraska, The Chosen Object, 1977, no. 19, illus.

Francis’ still lifes can be divided into three general categories: fruit, luncheons, and desserts. Dessert appears to have been the favorite course of Francis’ contemporaries, and for many of today’s collectors it remains his most appealing subject. Throughout his career, Francis painted a number of arrangements of strawberries, cakes, and cream, sometimes using different vessels or including a landscape background. In The Dessert, the landscape in the right distance adds depth to the picture and implies the contrast between untamed nature and its cultivated presentation in the domestic sphere. 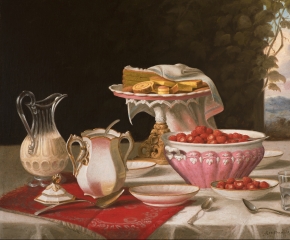 John F. Francis
Back To Top