Provenance: the estate of James Vandergrift, Kansas City, Missouri, until 2010

In a country home with a Dutch door, open rafters, and a view of a mountain lake, an elderly couple spends a leisurely Sunday afternoon indoors while a young man courts their daughter on the porch outside. Carlin likely structured the composition in order to reflect the different stages of life of the two couples, with the older generation inside and the younger one outside. While the older woman reads the family Bible, a traditional occupation on Sunday afternoons, her husband gazes out at the sunset, perhaps reminded of his own youthful courtship. On the wall that divides the old from the young hangs a clock, which may represent the time that has passed since then.

In the year that he painted Sunday Afternoon, Carlin also exhibited a courtship painting at the National Academy of Design entitled “May I Marry Your Daughter?” (unlocated). In later years, he used watercolors to depict a similar scene in The Suitor, 1875 (Museum of Fine Arts, Boston). 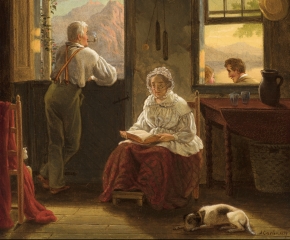 John Carlin
Back To Top