For his last Treasury Department mural, for the post office in Dexter, Missouri, in 1941, Jones chose the subject of corn husking. Instead of the broad prairie views of his wheat-harvesting works, tall corn stalks block the view into the distance. Jones echoed this closed composition in our painting of the same year, Cornfield, to convey the communal nature of corn picking. A team of four men works at close quarters and with their hands, each attentive to his task: the boy in the center holds a sack open for his companion to throw in a handful of ears; the man on the left waits to tie up the bag; and a man standing between the rows of corn picks more ears. Jones animated the background with the writhing linear movement and flickering highlights of the leaves and stalks that extend back to the horizon. 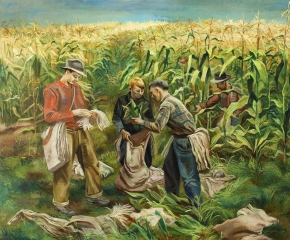 Joe Jones
Back To Top