In The Rustic Chat, a young man speaks pleasantly with a young woman in front of a barn. He has come a fair distance, judging from the panting dog at his feet, and has removed the saddle and bridle from his horse, since he intends to stay a while. The lady has gathered hay in her skirt, which she feeds to the horse as she strokes his head. Chickens peck and strut nearby, and barn swallows fly to and from their roost above.

The painting can be seen as a twist on William Sidney Mount’s well-known conversation piece Bargaining for a Horse, 1835 (New-York Historical Society), in which two farmers stand outside of a barn negotiating the sale of the horse that stands behind them. For Thompson’s young woman and her suitor, the horse that he rides and she feeds represents the household to which both would contribute in a future marriage—on which they appear close to making a deal. 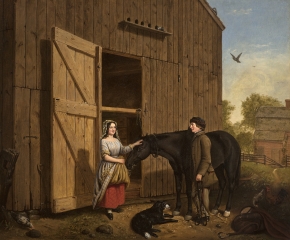 Jerome Thompson
Back To Top