The Old Almanac is Chalfant’s earliest located painting. It displays aspects of trompe l’oeil, especially in the folding of torn pages next to the almanac and the puckered cloth underneath the arrangement on the table.  The one identifiable book in this scene is Uncle Sam’s Large Almanac for 1842 (Uncle Sam’s Old Almanacs were published in Philadelphia by William W. Walker).  Also included are a candle, which stands up in the center, its glowing metal stand beautifully contrasting with the texture of paper and cloth, and a candle snuffer and a snuff box at the right, resting upon a book.  The painting as a whole suggests that it is not only a fascinating arrangement of objects of different form, texture, and date of origin, but also that it is perhaps a specific memorial. The picture may well be a reference to a life “snuffed out” with the candle now unlit and a reference back to the year 1842—perhaps to the year of birth of a deceased friend or relative, or to a figure of note, presumably male, given the snuff box.  In any case, this would not reference Chalfant’s parents or his two sisters who lived beyond 1886.  This premise in still-life painting, a “memento mori,” was especially popular in The Netherlands during the seventeenth century, though Dutch pictures of this theme usually display a greater variety of objects and are more colorful.  The dark tones and lack of color here especially underscore the mournful but evocative pictorial projection of Uncle Sam’s Large Almanac for 1842. 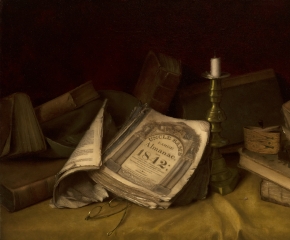 Jefferson David Chalfant
Back To Top