Half Moon Cove at Gloucester Bay

Like many marine painters of the 1860s and 1870s, James R. Brevoort frequently looked to the refined luminist style of John F. Kensett for inspiration. Kensett’s distinctive asymmetrical compositional format, which he first employed in Eagle Rock, Manchester, Massachusetts, was especially important for Brevoort and appears in many of his coastal scenes.

As Kensett did, Brevoort often edited his compositions to suit his artistic purposes. For instance, between painting the smaller Half Moon Cove, Gloucester Bay, Massachusetts, 1871 (Corcoran Gallery of Art, Washington, D. C.) and the larger, more highly finished Inside Eastern Point, Gloucester, Massachusetts, 1871 (Los Angeles County Museum of Art), Brevoort altered the profile of the rocks, added trees, and included Eastern Point in the left distance.

This creative response to a natural subject may explain the composition of our Half Moon Cove at Gloucester Bay, which appears to depict the western shore of Gloucester Harbor looking north from a point near what is now Half Moon Beach, with Ten Pound Island in the right distance. Although the view from Half Moon Beach never would have looked like this, Brevoort built on Gloucester's topography to create an arresting image in which emerald-blue waters encircle reddish-brown boulders. By choosing a low vantage point, Brevoort monumentalized the age-old rocks, which jut above the horizon, impervious to the constant ebb and flow of the sea around them. The unusual emphasis that Brevoort placed on the rocks in this painting suggests the additional influences of William S. Haseltine, who painted “rock-portraits” on the New England shore from 1862 to 1866, and, more generally, the newly popular science of geology. 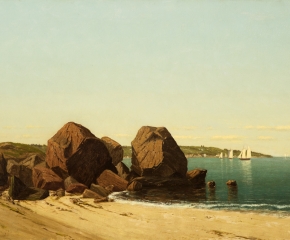 James R. Brevoort
Back To Top