Provenance: Mr. and Mrs. Curtiss K. Thompson, New Haven, Connecticut; by descent in the family, until 2006

This rare and important painting depicts Black Warrior, a medium-sized American clipper ship that was launched late in 1853 from the yard of Austin & Company in Damariscotta, Maine. Black Warrior was 234 feet in length, 42 1/2 feet in breadth, 23 feet in draft, and she weighed 1828 tons. Her first owner was William Wilson & Son of Baltimore, which purchased her at the time of her completion for $90,000, and Captain Murphy was the first to command her.

Black Warrior’s maiden voyage took her from New York to Australia by way of London. The vessel then continued on to South America and returned to New York on June 23, 1855. She sailed for San Francisco on September 6, 1855, making the passage in 124 days, and then sailed to Hong Kong and back. In 1862 she was sold to James Baines & Co. and subsequently sailed under the British flag as City of Melbourne.[1]

Clipper Ship Black Warrior displays Buttersworth’s thorough knowledge of naval architecture and his meticulous draftsmanship. He dramatized the scene by choosing a low vantage point, as if the viewer were sitting in a dinghy right on the water. The sun gilds the edges of the smoky pink clouds that spread across the afternoon sky, and a strong wind fills the sails of other clipper ships in the distance. 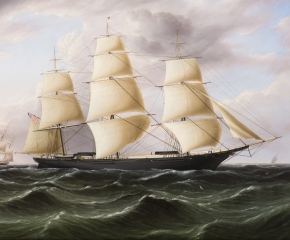 James Buttersworth
Back To Top