The Loiterers depicts Wiles and his wife Mary “lingering over the remnants of their repast at a restaurant table,”[1] probably drinking Café Brulot. Both figures are watching the preparation of the drink, which entails pouring cognac or brandy over a sugar cube, lighting the cube on fire, and then dropping the cube into a cup of coffee. The painting closely relates to one of Wiles’ entries at the previous annual exhibition, The Corner Table (illustrated in Christie’s catalogue, December 4, 2003, lot 33), in which Mary appears in a similar costume. This painting draws on Manet’s famous Le Bar aux Folies-Bergere (c. 1881-82, Courtauld Institute of Arts, London) both in the frontality of the image and in the use of a mirror. More generally, the image reflects Wiles’ early adoption of elements of French Impressionism, as seen in the bohemian subject matter of The Loiterers. 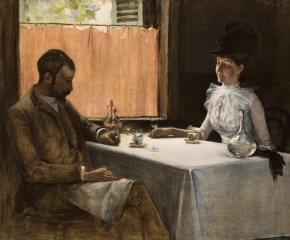 Irving Ramsey Wiles
Back To Top