A Gondolier, Venice depicts a gondola as it glides across a serene lagoon. For Rose, this painting was an experiment in composition and color. Although the date of the painting is unknown, the compositional type, an open foreground with much of the detail crowded in a narrow band toward the top of the image, suggests that it was painted during the 1890s.[1] Rose structured the image by balancing the vertical moorings and campanile against the insistent horizontal emphasis of the far shore, the horizon, and the rippling water. In the open foreground, blues and greens veil a layer of rose-colored paint, a subtle effect that imitates the shimmering surface of the water. The yellow campanile and peach buildings on the far shore also reflect in the water, further enriching the blend of colors. Finally, impasto in the sky suggests sunny but slightly hazy weather conditions, contributing to a distinct sense of atmosphere in the painting. 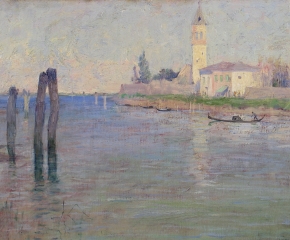 Guy Rose
Back To Top