The work shown here was painted in 1931 and portrays a Chow Chow named Pooch who was the pet of Ellen Douglas Williamson, a close friend of Wood's wife and the original owner of the painting.[1]  Showing his wit and good humor, Wood painted a portrait of the dog's head much in the same formal style as he would have painted a portrait of a human.  He even goes so far as to paint Latin and Roman numerals along the top which is reminiscent of the Northern Renaissance style that had such a huge influence on Wood.

Between the years 1928 to 1942 Wood experienced the height of his mature style for which he is known.  While he was doing some of his best work he was also married then divorced, teaching and receiving numerous honors.  As a result of the distractions he was not extremely prolific.  Therefore these later paintings are wonderful examples, yet rare and hard to come by as most are held in museum and institutional collections and rarely come up for public sale. 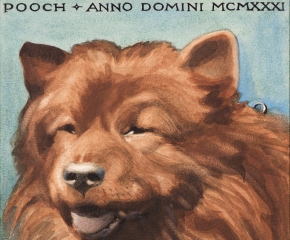 Grant Wood
Back To Top