Although best known for his architectural compositions, Ault treated the subject of the female body in his early drawings and returned to it in major late works such as New York Rooftop, 1940 (collection of Raymond J. Learsy), Nude and Torso, 1945 (collection of Virginia M. Zabriskie), and Sculpture on a Roof, 1945 (Butler Institute of American Art, Youngstown, Ohio). Drawn in 1923, when Ault’s style had reached its early maturity and he was being represented by the prominent modernist dealer Stephan Bourgeois, Reclining Figure displays the sharply defined and carefully shaded technique that appears in his architectural drawings. Yet the only straight line in the drawing is the one indicating the edge of the bed on which the figure rests. Ault clearly delighted in the opportunity to render the great variety of curves that his subject offered him, from the undulating line that defines the woman’s shoulder and hips to the sharp curves in the folds of her blanket. 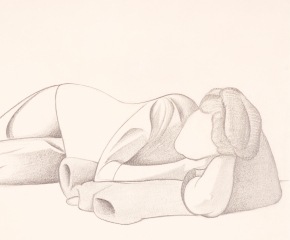 George Ault
Back To Top