In 1924 Benson traveled to Mobile, Alabama, to visit his daughter Elisabeth, who had married a plantation owner’s son.  He fished and hunted along the Dog and Deer rivers near her home, but his stay was very brief. According to the artist’s biographer, Faith Andrews Bedford, Benson “did not care for Alabama’s humid, sultry weather and did not pay a return visit to a climate so very different from the cool, crisp air of his native New England.”[1] He produced only six watercolors during this trip, one of which is Deer River, Alabama. This work is an evocative study of water, light, and atmosphere, all of which were preoccupations of Benson’s throughout his career. It combines the most appealing aspects of Benson’s art: the exhilaration of being outdoors with the technical virtuosity of an artist who had completely mastered his medium. 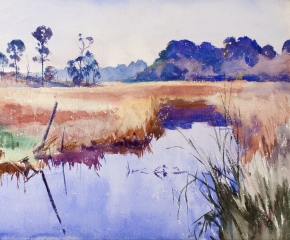 Frank W. Benson
Back To Top