Robbin’s Reef lighthouse, named after the small ridge of sand upon which it is built, is located just off the northern tip of Staten Island, near the entrance to the Kill van Kull, a treacherous and narrow three-mile waterway that connects Upper New York Bay to Newark Bay. The original four-story octagonal granite tower, shown here in Silva’s painting, was built in 1839, and guided vessels clear of the reef until 1883, when it was torn down and replaced with a cast iron and brick conical tower, the top half of which was painted white, and the bottom brown. The lighthouse, which is no longer in service, is often referred to as “Kate’s Light,” and stands as a monument to Katherine Walker, the courageous woman who operated the remote lighthouse from 1895 until 1919.

Silva’s vantage point in Robbin’s Reef Lighthouse off Tompkinsville, New York Harbor is from the shores of, or in the waters around, Tompkinsville, Staten Island. The landmass to the left of the tower is Jersey City, and to the right is lower Manhattan. The composition is carefully balanced and orderly; Silva punctuates the canvas with the vertical forms of the reed on the right, the lighthouse, and the schooner on the left and the horizontal shapes of the rowboats scattered across the gently rippling water. The bustle of the metropolis in the distance is far removed from this tranquil scene, which is presided over by the protective lighthouse.  The sun blazes through the haze of the clouds, illuminating the lighthouse and the water behind it. This creates a visual metaphor of a kind often seen in Silva’s work: that of the natural light of the sun juxtaposed with the man-made light of the lighthouse. According to Mark Mitchell, lighthouses held a special meaning for Silva, who, as a veteran of the Civil War, saw them as heroic protectors of America’s coastline as well as admirable feats of modern technology.[1] 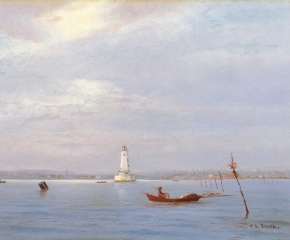 Francis Augustus Silva
Back To Top