Homage to Rocky Marciano was created in 1969 following Marciano’s death late that summer in a small plane crash near Newton, Iowa. In the painting Marciano is portrayed being declared the winner of his historic match with Jersey Joe Walcott in Philadelphia on September 23, 1952.

In this painting Martin emphasizes balance, equilibrium and symmetry. The fighter and referee are pictured with their arms raised and their backs to the viewer. They appear in silhouette before a rectangular arrangement of newsmen who face forward. The composition is in keeping with the artist’s belief that gravity was the foundation of pictorial design. In his works of the 1950s and 1960s Martin often emphasized silhouette. At this time his brushwork evolved from a highly fluid and curvilinear style to the rougher and more spiky mode of painting witnessed here. In later years he also utilized a palette knife to make selected areas stand out strongly as flat shapes. His paintings also became more lightly orchestrated in terms of color, and more direct in execution. His overall palette became more varied, and consists here of Mars black, cadmium red light, cadmium orange, alizarin crimson, olive green, viridian green, cobalt blue, cerulean blue, ultramarine blue, raw sienna, burnt sienna, yellow ocher, cadmium yellow, raw umber and burnt umber. 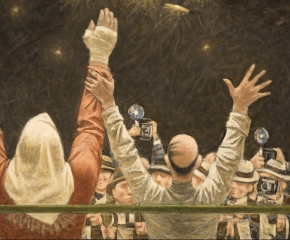 Fletcher Martin
Back To Top