This painting exhibits Nourse’s ability to capture beauty in her everyday surroundings.  A goldfish bowl and a pot of flowers rest on a tabletop. Another potted plant sits on the floor in front of a window that looks out to a lush garden.  The floral elements in Etude, Fleurs appear in another painting, La reverie (Les poisons rouges), c. 1910.  In La reverie, a woman reflects over a similar spherical fish bowl and the flowers to the right of the table resemble the characteristics and coloring of the potted flowers of Etude, Fleurs. 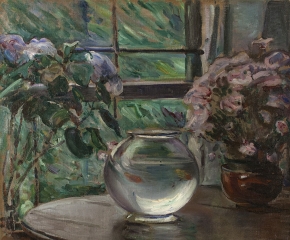 Elizabeth Nourse
Back To Top