The bonnets, top hat, and clothes that Henry's figures wear in A Sunday Visit suggest a nostalgic antebellum setting. The house on this pretty street lined with elms goes back even farther in time, to the Colonial period that fascinated Henry and his contemporaries, and the carriage in which the visitors sit is an antique from Henry's collection. Dogs on either side of the street signal the comfortable domesticity of the scene, while wildflowers growing on the lawn, and a backboard near a barn in the distance, suggest Thomas Jefferson's agrarian ideal, abandoned during the process of industrialization.

Henry painted the horse and figures in the precise manner he learned early in his career, and for which he was known as the American Meisonnier. Yet he brought the scene up to date with broader handling in the background and a bright, pastel palette that reflects the idyllic setting of the painting as well as the sunny mood in American art at the turn of the 20th century. 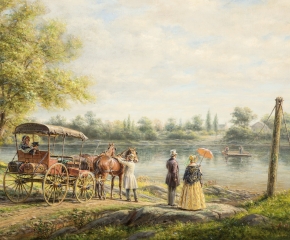 Edward Lamson Henry
Back To Top