While staying at Old Lyme in 1912, Greacen had painted the harbor at nearby Noank, and around 1930 he appears to have revisited the Connecticut shore, this time at Southport. Southport Harbor shows the yachts at anchor that fill the narrow inlet to this day. The distinctive balcony of the Pequot Yacht Club can be seen on the left, and on the right, the golf course of the Country Club of Fairfield stretches into the distance. Greacen’s gauzy, indistinct modeling and breezy, high-keyed palette were perfectly suited to this scene of calm summer leisure. The open water in the foreground suggests that Greacen sketched the view from another boat in the harbor. 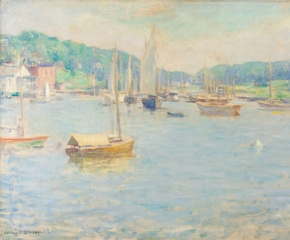 Edmund Greacen
Back To Top