Although it is not known if Johnson ever visited Connecticut with fellow artist John F. Kensett, he was familiar with Connecticut scenery through Kensett’s work, and after Kensett’s death, Johnson began to take the train from New York to the Connecticut coast. Following an 1875 visit that produced Near Noroton, Connecticut (Phillips, de Pury & Luxembourg, New York, May 21, 2002, lot 31), in which Johnson’s similarity to Kensett is striking, Johnson painted at least three pictures based on an October 1878 trip to Cos Cob, Connecticut. These paintings fuse Kensett’s legacy with elements of the Barbizon style then edging out the Hudson River School, while remaining true to the close observation of nature that appears in Johnson’s work throughout his career.

Catnip Island near Greenwich, Connecticut is the largest known picture that Johnson painted based on his Cos Cob visit. Although the island that it depicts is no longer known, it was likely one of the many small outcroppings to be found in and near Cos Cob Harbor and Greenwich Cove. Like Kensett, Johnson presented these rock formations in a striking asymmetrical profile, but unlike Kensett, whose late work bordered on abstraction, Johnson included figures boating and walking along a path, as well as a good deal of foreground detail. Compositionally, the work is consistent with Johnson’s previous work and with that of many of his fellow Hudson River School painters during the 1870s.

In keeping with the Barbizon style, however, Johnson’s brushwork is loose enough to convey the volume of the clouds, the textures in the foreground, and the dull reflection of the distant trees in the water. Yet he kept it tight enough to clearly define the rock formation and the figures and foliage in the foreground as well. Always a master of tonal relationships, Johnson convincingly created a partly overcast light effect—overcast skies were a favorite of the Barbizon painters—in which the left foreground is lit with hazy sunshine, but the rest of the forms are bathed in a muted half-light. The partially silhouetted tree projecting out from the rock, the expansive sweep of the clouds to the right, and the dark storm clouds above add a hint of the moods associated with Barbizon painting without undermining the appeal of the scenery and the leisure activities taking place.

Although evidence for the painting’s exhibition has not yet surfaced, its large size and high degree of finish suggest that Johnson painted it either for exhibition or for an important commission. The discrepancy between the dated signature on the recto and the inscription on the verso likely indicates that Johnson painted the work at the end of 1878 and inscribed when he exhibited or sold it the following year. 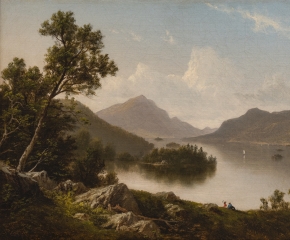 David Johnson
Back To Top