Gifford spent several summers in the late 1860s and early 1870s on Vineyard Sound, which is between Martha’s Vineyard and the Elizabeth Islands, southeast of Buzzards Bay. In particular, he worked at Cuttyhunk, the last of the Elizabeth Islands, and across the sound at the Native American village of Gay Head (now called Aquinnah), at the westernmost tip of Martha’s Vineyard. He exhibited a view of Gay Head at the Utica Art Association in 1871 and a view of Vineyard Sound at the Palette Club during his brief stay in New York during the winter of 1871-72.

Ships off Gay Head, 1867, is the earliest record of Gifford’s visits to Vineyard Sound, and one of his largest paintings of the area. In the strong winds just beyond the shelter of the Sound, a small yacht carries a group of pleasure boaters swiftly through the choppy water. The distinctive cliffs of Gay Head can be seen in the right distance, and atop them is the tiny form of Gay Head Light, surrounded by outbuildings that have since been demolished. The landmass in the left distance is likely Cuttyhunk, or perhaps Nashawena Island, the next one in the chain. Under billowing clouds, full-rigged ships mix with smaller fishing and recreational vessels in the left middle ground and distance. Ships off Gay Head combines the taut clarity of maritime painting with the sense of place and attention to atmosphere that characterize Gifford’s best work. 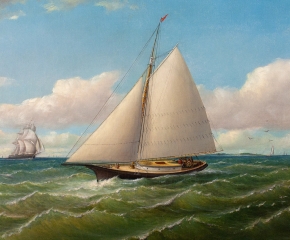 Charles H. Gifford
Back To Top