Painted in 1917, a year Burchfield referred to as his "golden year," Frosted Windows is an excellent example of Burchfield’s attention to both the local character and the expressive potential of his Salem, Ohio surroundings. In a notebook from this year, Burchfield described the personalities of houses that he passed: “fish-eyed…astonished…mournful hound, joy…prim prudish maiden.”[1] Burchfield conveyed the uncanny character of the house in Frosted Windows by using drab colors to describe the nondescript architecture, but creating contrast in the windows between the bright white paper and heavy black outlines. As a result, the gleaming windows stand out from the architecture to confront the viewer like staring eyes. This device presages more overt images of personified houses such as The Cat-Eyed House, 1918 (Memorial Art Gallery, University of Rochester, New York) and Rainy Night, 1918 (The Philips Collection, Washington, D. C.). 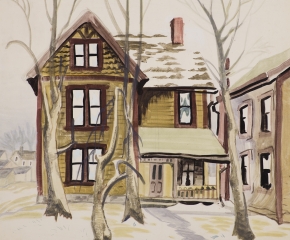 Charles Ephraim Burchfield
Back To Top