Picnic Supper on the Sand Dunes

Exhibited: Pennsylvania Academy of the Fine Arts, Philadelphia, 1892, no. 58.

From 1888 to 1890, Curran resided in Paris and studied at the Académie Julian under Benjamin Constant, Jules-Joseph Lefebvre, and Henri Lucien Doucet.  His exposure to Impressionism while in Paris undoubtedly influenced the bright palette and attention to effects of light and atmosphere that are evident in his subsequent work.  In Picnic Supper on the Sand Dunes, Curran manages to balance the academic drawing style of his teachers with the loose brushwork of Impressionism.  This technique would later be replaced by a tight and precise handling of paint, as seen in his Betty Newell, 1922 (The Metropolitan Museum of Art).  However, his concern with warm, enveloping sunlight and a jewel-like color palette in Picnic Supper on the Sand Dunes was consistent throughout his career. 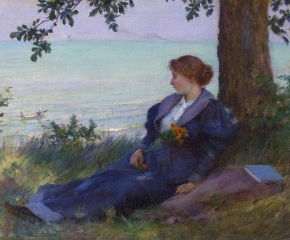 Charles Courtney Curran
Back To Top