Delightful paintings of wild fowl chicks, such as grouse and quail, were a favorite motif throughout Tait’s career. Young Ruffed Grouse exemplifies this popular subject, and depicts a group of five endearing chicks with one tugging at a twig and another investigating a ladybug. According to Tait’s journal, Young Ruffed Grouse was originally paired with another small oval format painting titled Young Quail (location unknown). 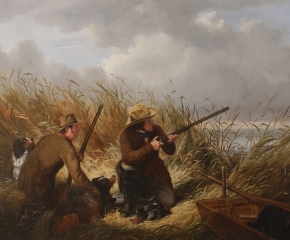 Arthur Fitzwilliam Tait
Back To Top