A Portrait of Jeanette Payne

The sitter for this portrait, Jeanette Payne, was born in 1818. Although the painting has been dated to c. 1841, the stylized composition and planar modeling resemble Phillips’ work of the 1830s.[1] As in Mary Hoyt, c. 1836 (Connecticut Historical Society, Hartford), Phillips portrayed the sitter with her elbows angled outward, one leaning on a pile of books on a table. This pose creates triangular negative spaces between the sitter’s arms and the narrow waist of her dress. These spaces echo both the triangular shape of her exposed neck and shoulders and the broadly triangular shape formed by her arms and shoulders leading up to her head. The slanting upper neck and three-quarters profile of the sitter interrupt this regularity, as do her hands, one of which holds an herb, while the other hangs limply from the table. In addition to carefully rendering the sitter’s pleasant features and confident gaze, Phillips paid a good deal of attention to her black dress, which is attractively modeled with white highlights and trimmed with crisp lace.

[1] Before their catalogue in Ammi Phillips: Portrait Painter 1788-1865, Barbara and Lawrence Holdridge had dated A Portrait of Jeanette Payne to c. 1838 in their 1965 Connecticut Historical Society Bulletin article. 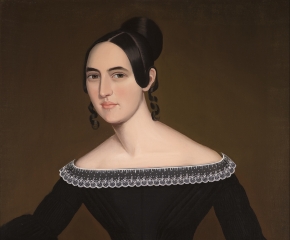 Ammi Phillips
Back To Top