William Stanley Haseltine was born in Philadelphia to a family of talented artists—all of his brothers were involved in artistic pursuits, and his son, Herbert became a sculptor.  Haseltine began his studies at the University of Pennsylvania and received his degree from Harvard University in 1854.  When he returned to Philadelphia, he studied art under Paul Weber, before departing for Germany in 1855.  Haseltine quickly became one of the leading figures among the group of American artists in Düsseldorf, and in 1856, accompanied his artist-friends Emanuel Leutze, Worthington Whittredge, and Albert Bierstadt on a sketching trip down the Rhine and to Italy.  Haseltine returned to the United States in 1859, joining Leutze, Whittredge, and Bierstadt in the famous Tenth Street Studio Building.

Haseltine drew and painted scenes of the New England shoreline, from Rhode Island to Maine, more than any other subject during his few mature years in America.  His American coastal views are the work of a well-educated artist and demonstrate an accurate knowledge of and keen interest in scientific accuracy.  His renderings of specific rock formations and particular light conditions gained him critical acclaim, a strong following of patrons, and assured him a prosperous career.

Haseltine’s paintings reflect an important movement in mid-nineteenth century America, namely, the belief that art’s purpose was best expressed through the accurate depiction of nature, and that the science of geology had the authority to rival biblical accounts of the earth’s creation.[1]  In addition, the writings of English art critic and philosopher John Ruskin had spawned an American Pre-Raphaelite school devoted to the close replication of nature. Haseltine accomplished his remarkable accuracy through intense on-site studies, which he later reworked in his studio, using minute brushstrokes.  He worked in a most detailed manner with a vivid color palette made predominantly of the striking color complements of orange and blue that suggest an intensity of light and air.

After his marriage in 1866, Haseltine and his wife settled in Rome for most of the next thirty years.  He exhibited his works extensively at prestigious venues such as the Pennsylvania Academy of the Fine Arts, National Academy of Design, and the Brooklyn Art Association. His works can be seen in many museums, including the Metropolitan Museum of Art, New York; Museum of Fine Arts, Boston; National Gallery of Art, Washington, D. C.; Cooper-Hewitt Museum, New York; Saint Louis Art Museum, Missouri; Davenport Museum of Art, Iowa; Terra Museum of American Art, Chicago; Fine Arts Museums of San Francisco, Corcoran Gallery of Art, Washington, D. C.; Brooklyn Museum, New York; and the Mariners’ Museum, Newport News, Virginia.  In 1992, an important exhibition of Haseltine’s work was organized by The Fine Arts Museums of San Francisco and solidified his reputation as an important Luminist painter. 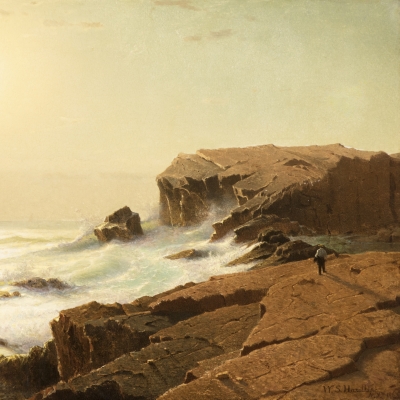