William McGregor Paxton was one of the leading Boston School painters along with Edmund Tarbell and Frank Benson.  Paxton was particularly well known for his extraordinary attention to the effects of light, and to the details of flesh and fabric as evident in his paintings of idealized young women in beautiful interiors.  He also gained prominence for his portraits, which included Grover Cleveland and Calvin Coolidge, in addition to numerous Philadelphians (he was informally called the “court painter of Philadelphia”).  He had a studio in the famous Fenway Studios, Boston from 1906-1915.

Paxton was an active member of the art community.  He taught at the Boston Museum of Fine Art School from 1906-1913.  He belonged to organizations including Academician at the National Academy of Design, 1928; the Salmagundi Club, the St. Boltoph Club, and the Art Club of Boston and Philadelphia.  Paxton exhibited at prestigious venues including the Boston Art Club, the Art Institute of Chicago, the Pennsylvania Academy of the Fine Arts, the Pan-American Exposition, 1901; the St. Louis Exposition, 1904, and the Corcoran Gallery.  His works are housed in renowned private and public collections including the Boston Museum of Fine Art, the Pennsylvania Academy of the Fine Arts, the Metropolitan Museum of Art, the Corcoran Gallery, the Cincinnati Museum, the Detroit Institute of Art, the Wadsworth Athenaeum, and the St. Louis Art Museum. 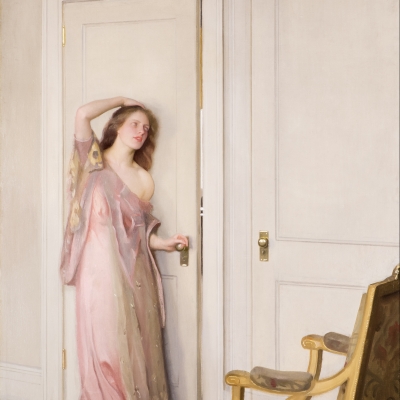