No figure was more representative of the period in American art between the nation’s centennial in 1876 and World War I in 1914 than William Merritt Chase. The son of an Indianapolis shopkeeper, he studied briefly in New York and Saint Louis before setting out for Europe, as so many artists of his generation would do. Having trained in Munich alongside Frank Duveneck and J. Frank Currier, he returned to New York in 1878, just in time to become a leader of young, progressive artists rebelling against the artistic establishment. While he frequently visited Europe throughout his career, he remained based in New York, exhibiting at the rebels’ newly founded Society of American Artists and later with the Ten American Painters, and summering in Shinnecock Hills, Long Island. His exotically decorated studio in the Tenth Street Studio Building served as a salon for the art world, and he was extremely influential as a teacher from 1878 to 1913 at the Art Students League of New York, his Chase School of Art, and his Shinnecock Hills Summer School of Art.

Eclectic both in style and subject matter, Chase shifted between moody realism inspired by the Old Masters, modern Whistlerian compositions, and breezy Impressionism, and between portraits, figure paintings, still lifes, and urban and rural landscapes. While he taught at Shinnecock from 1891 to 1902, he focused particularly on landscapes of the sandy, grassy area near Southampton, which he painted outdoors in a highly appealing Impressionist manner. 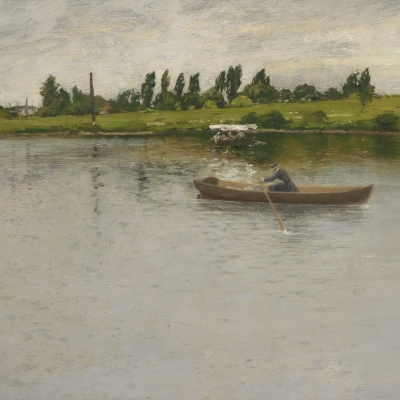