William Mason Brown was born in Troy, New York, and began his artistic career while still a teenager.  At fourteen years of age Brown was employed by Thomas Grinnell, a local ornamental painter, and later studied portraiture under Abel Buel Moore. In 1850 Brown moved to Newark, New Jersey, with Grinnell, and there began to paint landscapes characterized by the kind of romantic naturalism found in the works of the Hudson River School artists, especially those of Thomas Cole. In 1858 he moved to Brooklyn, New York, where he continued to paint landscapes. During the 1860s Brown abruptly switched to painting fruit and floral still lifes almost exclusively.

With his change in genre came a change in his painting style.  While Brown’s landscapes are executed in broad, painterly strokes, his still lifes show an almost photographic realism marked by meticulous brushwork and a vibrant palette. He painted lush arrangements of summer’s natural bounty, set outdoors against rocks and greenery. Perfect specimens of plums, berries, peaches, and grapes are rendered in vivid colors and minute details. The frost on the skin of the fruit, the tiny dewdrops hugging the curve of the peaches and plums, and the miniscule seeds dotting each strawberry are all perfectly delineated. Art historian William H. Gerdts notes Brown’s ability to convincingly render the tactile quality of individual fruits: “There often seems to be a ‘halo’ around each peach, created by the light caught in the fuzz. Each particle of each berry has its own highlight, each fruit has a quality of weight.”

Brown achieved his first success with his still-life paintings. His reputation grew, and his financial situation improved during the 1860s, when he sold A Basket of Peaches Upset to William Schaus, a well-known New York art dealer, for what was then the exorbitant sum of two thousand dollars. This work was reproduced by the chromolithographic process, a relatively new color-print technique gaining prominence in America at this time, which in turn brought Brown’s art to the attention of a wide audience. A number of Brown’s fruit paintings were reproduced in this fashion, and Currier & Ives lithographed at least one apple picture in 1868. Brown was an active member of the art community and exhibited at the National Academy of Design from 1859 to 1891, Brooklyn Art Association from 1869 to 1886, and the Pennsylvania Academy of the Fine Arts from 1869 to 1891. His works are in important public and private collections including the Manoogian Collection, Taylor, Michigan; Peabody Institute, Baltimore; J.B. Speed Museum, Louisville, Kentucky; and the Pennsylvania Academy of the Fine Arts, Philadelphia. 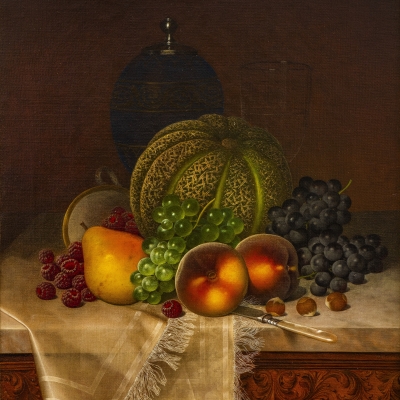