With the publication of On the Origins of Species in 1859, Charles Darwin’s controversial theory relating man to other creatures of the animal kingdom shook the foundations of science, religion, and society.  The impact of Darwin’s hypothesis on artists is a relatively unexplored topic. However, it must have been a rich resource for William Holbrook Beard’s pictorial imagery.  Beard believed that animals possessed souls and that, like man, they too could express human emotions and feelings.  It was this anthropomorphic idea that Beard explored throughout his painting career, rendering a variety of animals (especially bears, squirrels, foxes, and monkeys) to portray, and sometimes satirize human behavior.

Beard was born in Plainsville, Ohio, and began his artistic career as an itinerant portrait painter before moving to Buffalo, New York in 1850. In 1856 he traveled through Europe where he befriended Albert Bierstadt, Sanford Gifford, and Worthington Whittredge. Upon his return to the United States in 1858, Beard settled again in Buffalo and began to send his paintings to the National Academy of Design in New York City for exhibition. Beard was an integral force in the local art community as a teacher and participant in the early planning of the Buffalo Fine Arts Academy.

In 1860, Beard moved to New York City and set up a studio in the prestigious Tenth Street Studio Building where he held a space for nearly forty years. Beard’s animal paintings continued to garner attention, and by 1862 was he was elected Academician of the National Academy of Design. Both he and his older brother James Henry (also an animal painter) gained enormous success during the 1860s, when animal narrative, mythological, and fairytale paintings became treasured escapes from the cruel realities of the Civil War.  In 1886, Francis C. Sessions was to refer to William and his brother James as “...incomparably the greatest animal painters this country has produced.” Beard’s paintings such as Bulls and Bears of Wall Street (The New-York Historical Society) and March of Silenus (Albright-Knox Gallery) are foremost examples of his oeuvre.

Beard exhibited extensively at the National Academy of Design until the year before his death. He also exhibited at the Pennsylvania Academy of the Fine Arts, the Brooklyn Art Association as well as the Centennial Exhibition, 1876, and the Paris International Exposition. He also showed his work at Snedicor Art Gallery, Samuel P. Avery, and William and Everett, all located in New York City. In 1855, Beard published a treatise titled Humor in Animals, in which he devoted chapters to individual species of animals and birds, anthropomorphizing various aspects of each, while offering a significant key to his pictorial meanings.  His work is found in the Albright-Knox Art Gallery, New-York Historical Society, Brooklyn Museum, Wadsworth Atheneum, Amon-Carter Museum, Smithsonian Museum of American Art, Art Institute of Chicago, and the Rhode Island School of Design. 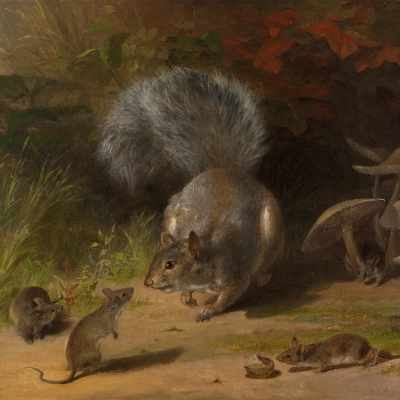