William Hart lived for nine years at his birthplace of Paisley, Scotland, before his family immigrated to the United States in 1831 and settled in Albany, New York. He began his artistic career humbly, painting carriages and window shades, but by the age of 18 he had become an itinerant portrait painter, traveling as far afield as Virginia and Michigan. This journeyman’s lifestyle ultimately disagreed with Hart; he fell ill in 1849 and left for Scotland to recuperate. In 1852 he returned to the United States committed to landscape painting and soon made a name for himself, becoming an associate of the National Academy of Design upon opening a studio in New York in 1854. William and his brother James M. Hart painted in a Hudson River School style that won praise from critics and patronage from important collectors.

From the 1850s into the 1870s Hart was a prominent personality in the New York art world. He was elected a National Academician in 1858 and was a founding member and president of both the Brooklyn Academy of Design and the American Water Color Society. In addition to his enduring presence at National Academy exhibitions from 1848 until his death in 1894, Hart exhibited at the American Art-Union from 1847 to 1849, the Boston Athenaeum from 1855 to 1864, the Pennsylvania Academy of the Fine Arts from 1854 to 1867, and the Brooklyn Art Association from 1861 to 1883. Major museums that house his work include The Metropolitan Museum of Art, New-York Historical Society, and National Academy of Design, New York; Cleveland Museum of Art; National Museum of American Art, Washington, D.C.; High Museum of Art, Atlanta; Yale University Art Gallery, New Haven; and the Museum of Fine Arts, Houston. 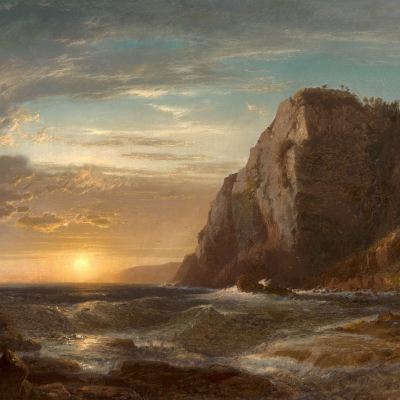