Born in Philadelphia, William Lippincott was a painter of interiors, portraits, landscapes, figure, and genre scenes. He attended the Pennsylvania Academy of the Fine Arts and in 1874 went to study in Paris under Léon Bonnat at the Société de Artistes Français. There he became a plein-air painter and shared a studio with fellow American artists Edwin Blashfield, Milne Ramsey, and Charles Pearce. Lippincott remained in Paris for approximately eight years, exhibiting at the Paris Salons through 1882. He then returned to the United States in 1884, setting up his studio in New York City. Lippincott exhibited regularly for more than forty years at the National Academy of Design, and was elected an associate member in 1884 and a full academician in 1896. He established still-life painting as a regular part of the Academy’s curriculum, emphasizing to his students the importance of color and form as well as drawing. While Lippincott pursued his career primarily painting portraits, figurative compositions, and landscapes, he was also a noted painter of set designs including for the operas La Bohème and Salambo.

In addition to the National Academy, Lippincott was a member of the New York Etching Club, Philadelphia Sketch Club, American Watercolor Society, and the Century Association.  He was a regular contributor to the annual exhibitions held at the Art Institute of Chicago, Pennsylvania Academy of the Fine Arts and the National Academy. Lippincott also exhibited at the 1878 Universal Exposition, Paris. 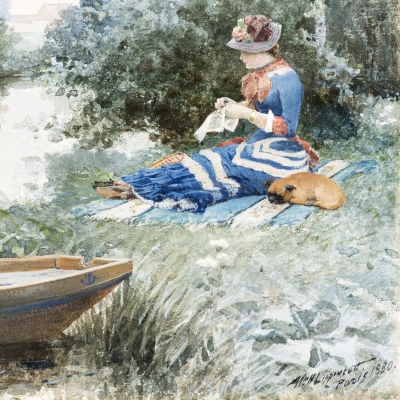