Born in Allegheny, Pennsylvania, William Anderson Coffin graduated from Yale University in 1874 and initially worked with his father in a Pittsburgh insurance company. After only a year, Coffin returned to Yale to pursue his true passion, painting.  In 1877 he studied in Paris with Louis-Marie-François Jacquesson de la Cheveruse for four months, after which Coffin studied in Léon Bonnat’s atelier until 1882. Coffin made his debut at the Paris Salon in 1879 with a painting of Bonnat’s life class, and he showed there again in 1880 and 1882. His artwork was greatly inspired by the Barbizon painters, especially Jean-Baptiste-Camille Corot, Charles-François Daubigny and Théodore Rousseau, whom Coffin hailed as “The Three Princes.”[1]

In 1882 Coffin returned to the United States, and although he maintained his country home, Pine Spring Farm, in Jennerstown, Pennsylvania, he settled permanently in New York City and held a space in the Holbein Studios on West 55th Street. Coffin remained close friends with Bonnat and he often returned to Paris, where, according to a fellow artist, he “was the life of the place on his visits. The French adored him and considered him one of them.”[2]

Coffin exhibited extensively at the National Academy of Design throughout his career. In 1886 he had two entries, Reflections, and Moonlight in Harvest, which garnered him the coveted Hallgarten Prize, an award for the best painting by an artist under the age of thirty-five.[3] That same year, Coffin was appointed art editor for the New York Evening Post, a position he held until 1891. From 1896 to 1901 Coffin was an art critic for the New York Sun and also contributed articles on French and American art to various periodicals, including Scribner’s, Harper’s Weekly, Century, and Nation. A highly respected critic, Coffin was appointed director of the Pan-American Exposition in Buffalo in 1901, and he helped to organize the Panama-Pacific Exposition in San Francisco in 1915.

Coffin belonged to the Union League Club, Architectural League, and the Lotos Club, in addition to French organizations, including the Société des Artistes Français, Société Nationale des Beaux-Arts, and the Fraternité des Artistes. He was elected an associate of the National Academy of Design in 1898 and an academician in 1912. He was awarded France’s prestigious Chevalier of the Legion of Honor in 1917. His work is housed in important public collections, including The Metropolitan Museum of Art, Albright-Knox Art Gallery, Buffalo, New York; National Gallery of Art, Washington, D. C.; and the Yale University Art Gallery, New Haven, Connecticut.

[1] David B. Dearinger, ed., Paintings and Sculpture in the Collection of the National Academy of Design (New York and Manchester: Hudson Hills Press, 2004), 110. 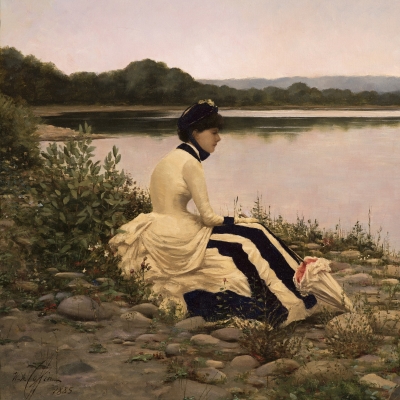