Willard Leroy Metcalf was born in Lowell, Massachusetts. He apprenticed himself to George Loring Brown, a Boston-based landscape painter whose work combined the topographical interest of the Hudson River School and the classical mood of the French landscape painter Claude Lorrain. Following this apprenticeship, he enrolled in 1876 at the newly founded School of the Museum of Fine Arts, Boston, where he developed rapidly under the instruction of the imaginative artist and teacher William Rimmer. By 1878 Metcalf’s paintings also reflected the influence of William Morris Hunt, the apostle of French Barbizon art in America. Metcalf supported himself as an illustrator until 1883, when he traveled to Paris. He studied at the Académie Julian with Gustave Boulanger and Jules-Joseph Lefevbre, who taught him academic figure painting. Under the influence of Jules Bastien-Lepage, Metcalf painted outdoors at the art colony at Grèz-sur-Loing, and he was one of the first American artists to visit Giverny, the picturesque town where Claude Monet had his house and studio.

Returning to America in 1888, he moved to New York and continued to support himself as an illustrator. His first great success was in 1896, when he won the Society of American Artists’ prestigious Webb Prize. The following year, Metcalf seceded from the Society of American Artists, along with other leading artists, such as Childe Hassam and John Twachtman, to exhibit their work independently as the Ten American Painters. Metcalf reached a self-proclaimed “renaissance” in his art in 1904, when he traveled to the Maine coast and responded more deeply and confidently to the landscape than ever before. Following this breathrough, he gained recognition for his work painted at the art colony in Old Lyme, Connecticut, beginning in 1905. Metcalf’s reputation and artistic abilities continued to grow during the 1910s, when the area around Cornish, New Hampshire, was  Metcalf’s favorite place to paint. Metcalf’s later work is considered to be some of his best. 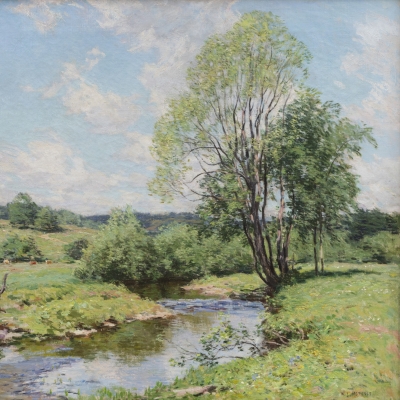