Warren Sheppard built two successful careers around his love of the sea: as a renowned marine painter and as a designer of yachts. He was born in Greenwich, New Jersey, a town along the Delaware River that had been associated with shipbuilding since early colonial times. His father was a sea captain and the young Sheppard took many voyages with him to make sketches of boats and water. Sheppard studied painting under marine specialist Mauritz F. H. De Haas and learned perspective drawing at Cooper Union in New York City. In 1879 Sheppard spent four months sketching in various Mediterranean port cities, and between 1888 and 1893 he lived and worked in Paris and Venice.

By his mid-thirties Sheppard had established himself as a successful marine illustrator and painter. He won high regard for the accuracy with which he rendered the nautical architecture and rigging, which derived from his intimate knowledge of boats. Sheppard was also an expert navigator and sailed many famous yachts in legendary races. Twice he commanded the Tammerlane when it won the New York to Bermuda race.  He was author of Practical Navigation, a textbook used for many years by the United States Naval Academy.

Sheppard exhibited his artwork in prestigious venues such as the National Academy of Design, Brooklyn Art Association, and the Pennsylvania Academy of the Fine Arts. He won medals at the St. Louis Exposition in 1904, as well as at the Denver Exposition in 1884. His works are found in public collections such as the Albright-Knox Art Gallery, Buffalo, New York; Mystic Seaport Museum, Connecticut; Toledo Museum of Art; and the Addison Gallery of American Art, Phillips Academy, Andover, Massachusetts. 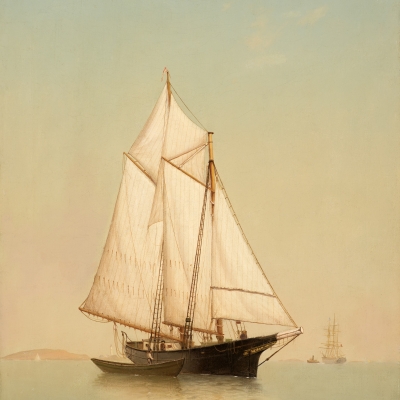